A Review of Contempt by Michael Cordell

It’s been some time since I read a legal thriller in the vein of John Grisham. So when I got my hands on this novel by Michael Cordell, I couldn’t wait to dive in and meet the main character, Thane Banning. Thane is a real estate lawyer who went to prison for five years for a murder he didn’t commit. After claiming his innocence for many years, he was finally released on a legal technicality. Now a free man, Thane must adjust to living on the outside and finding ways to connect with his wife, Hannah.

Just when Thane is getting back on his feet and working at his old law firm, he is pulled in to defend, Scotty “Skunk” Burns, a former fellow inmate accused of murder. Unable to resist Skunk’s plea for help, Thane takes the case although he is not a criminal defense lawyer. Not only was this a risky move but he couldn’t blow the chance at going up against DA Bradford Stone, the same prosecutor who put him in prison for five years.

Overall, the scenes, characters and dialogue were realistic. The author did a good job at showing Thane wrestling with the effects prison life had on his life on the outside. The author also did a good job at showing the struggles career criminals like his friend Gideon had in adjusting to being free. It was also interesting to watch these two characters interact because if they didn’t have prison as a nexus, they would probably have nothing in common. However, I loved the respect they had for each other.

As a lawyer, I especially enjoyed the courtroom cat and mouse games both lawyers played in presenting their evidence. The leg work Thane’s legal team (Kristin Peterson, 3rd year USC law student and his friend and ex-con, Gideon) did was very calculating but effective. Without giving away any spoilers I think the ending was a bit rushed and more clues could have been given. Nevertheless, it was a good twist.

Another thing I wished the author explored a bit more was Thane’s relationship with his wife. There was no intimacy except for moments when they held hands. Although his wife was supportive, I felt she was a bit flat and this was a missed opportunity to show some sexual tension/desire between the characters. Despite this, it was a good read that held my attention. I would definitely recommend this novel and read more by Michael Cordell.

Thane finally looked away from the stain and glanced around the room. “Doesn’t make sense. Why would Skunk even be in this room? One glance says there is nothing here worth stealing. And if he heard Gruber coming, he wouldn’t try hiding in here: he would run for the back door.”

Gideon chuckled and sized Thane up. “Whoo-ee. Baby, would you lookit you. Thinking more and more like a criminal every day.”

Thanks to TCK Publishing for a copy of this book and the opportunity to post a review.

Here is the link to the book: 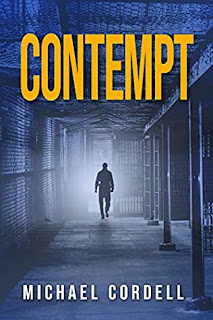 It’s A Book Thing Presents: An Interview with Miatta Harris, author of Walk Confidently into your New Season: A Guide to Build your Spiritual and Mental Muscles

June 07, 2021
Author’s Bio : Miatta Harris is a Liberian-American Poet, Author, Educator, and Self-Care Advocate. She has been an Educator ranging from early - childhood - high school for over 12 years. She enjoys helping scholars attain their goals and empowering them to reach their full potential.  In her first teaching job, she was a Headstart Teacher. Surrounded by emergent literacy, this is where her creative writing skills began. She often fosters creativity with her students through the arts, whether it is through dance, song, or poetry. Teaching is her natural gift; she later discovered that it is also her spiritual gift.  Faced with many trials and obstacles, writing became Miatta’s only outlet. She writes her poems from a standpoint of strength, resilience, peace, perseverance, and self-love. Writing, praying, and the arts have been a healing process for her during this journey of seeking fulfilment and purpose. The challenges she encountered in her adulthood have strengthened her desires
Post a Comment
Read more

It's A Film Thing Presents: An Interview with Gabriel Constans, screenwriter of the film – The Last Conception

February 08, 2021
Bio: Author, screenwriter and parent. Teacher of mindfulness, body and mental health. Writer, journalist and ukulele lover. Deliah Lawrence: Describe your journey of becoming a screenwriter? Gabriel Constans: It has been an interesting process and journey to move from having my book published, then writing the script and finding producers interested in making the film. Time wise, it took a total of about two years for that process, and two years before that to write the story and find a publisher. DL: Did you encounter any challenges with getting this movie from concept to the screen? GC: Since the story is quite unique it involved a lot of approaches to a variety of producers until I happened upon just the right people (Gabriela Ledesma & Callie Schuttera) at Poison Pictures. They understood it and made some great changes to the script, eventually turning it from a drama into a romantic comedy or dramedy.  DL:  What tips would you give to someone hoping to get into the wo
1 comment
Read more