A Review of The Mark by Kiki Swinson


This is the first time I’m reading anything by this author. The synopsis drew me in: Lauren exacting revenge on Matt, her hustler ex-boyfriend who kills her husband and kidnaps her baby because she stole money from him. She then tracks him down from New York to Virginia and when she finds him, he forces her to commit a bank robbery in order to get her baby back. Interesting storyline, but I was sadly disappointed in its execution and resolution.

Nevertheless, I thought it gave readers a good snapshot into the criminal/street life (drugs, bank robberies, and murders). The dialogue was authentic, the actions of Matt’s soldiers (Preech, Kanan and Juice) were realistic including the treatment of women (no respect whatsoever). There were frequent acts of violence some of which I thought was unnecessary.

Overall, this was a fast read. The author did a good job of depicting Matt’s craziness, Lauren’s strength in enduring his vicious actions against her in the quest for getting her child back, Lisa being in an abusive relationship as Matt’s girlfriend, and the naivete of the college students who tried to help Lauren get her baby back.

However, there were too many instances where the author repeated things like Lauren just giving birth a few days ago (as readers we know that), looping scenes (going back and forth to her apartment and the hotel), over-the-top instances of violence (senseless murders), cringe moments of abuse that went on for a while, almost every other page was laced with the b-word, the n-word, etc. Furthermore, the title, The Mark, was not really explored in the novel. All of which took away the potential of a good read. 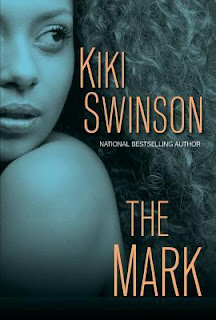 April 27, 2020
Poet’s Bio: Virginia Davis is a mother, poet, middle school English teacher, blogger, coffee lover, and author of four titles. She has been writing since the ninth grade, when she started using poetry and journaling as positive outlets while coping with the heavy emotions that came with the death of her oldest brother and not feeling accepted by her peers. Since then, writing has been her saving grace and has served as her one safe space where she feels free to truly be her most authentic self.

She has self-published all of her books; her most recent title is a poetry compilation entitled The Mending, and it chronicles her poignant and victorious journey from heartache to healing. It is a poetic depiction of her choosing to take her broken pieces and transform them into something beautiful--art, and its most glorious form. Her first young adult novel will be released in the summer of 2020 and she is working on part two of The Mending.
Virginia has a BA in English from Morgan State Un…
Post a Comment
Read more

April 29, 2020
Poet’s Bio: Neil M. Noble is a Washington, D. C. native whose newest creation is Moods of a Lake and Selected Poems, a collection of 45 poems that covers more than half a century of his thoughts, observations, feelings and emotions about the world. His book includes a series of visual art images designed specifically for each poem that brings a wonderful synergy of poetry and art. Neil is also an adjunct professor who teaches construction related courses in the Baltimore area.He and his wife enjoy traveling and spending time with family, friends and their dog.To learn more about his work, go to www.neilnoble.net
DL: What are some of your reflections during the COVID-19 pandemic? NMN: My feelings about this virus are mostly sad. The reaction to this threat was not fast nor thorough enough. We will never know how many lives might have been spared had we come together sooner.


DL: In celebration of National Poetry Month (April), can you share with us a few of your poems? NMN: Sure, I would l…
Post a Comment
Read more

April 29, 2020
Poet’s Bio:Terry Wright is a college graduate, writer, author, and poet who is trying to make his mark in this world. He was raised in the 90s and also brought up the old school way to treat women right. His books of poetry feature tales of lost love and spreading love about God. He also writes short stories that are based on true events that happened in his life. He lives in Alabama with his family.
DL:What are some of your reflections during the COVID-19 pandemic? TW: This virus is showing us that we need to lean on God about everything that is going on right now. See my poem about self-distancing.
DL: In celebration of National Poetry Month (April), can you share with us a few of your poems? TW: Here are two poems I would like to share:
Rules of LOVE
Be honest. Be truthful.
If you love someone or somebody don't mess over them.
Don't lie.
Be THERE when that person cry
Don't betray.
Don't creep.
Don't bit the hands that feed you and who is trying to help you.
Be THERE when th…
Post a Comment
Read more